Female Kenyan rapper, Razz Msupa´s death has hit the Kenyan music industry with a blow as fellow rappers including King Kaka could not come to terms with it.

I am now ready for 2021 too much going on this year, Just saw you jana night and prayed , it’s sad that you are gone. @razzmsupa Tuko Ligi Soo !!!! Safiri Salama.

It is alleged that Razz Msupa passed on Tuesday, the 4th of February following a short illness. 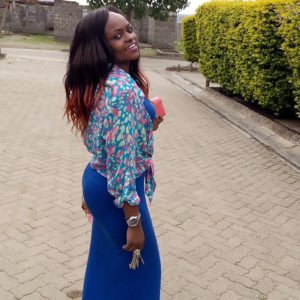 For those not well acquainted with the female name, Razz featured as one of the major female rappers in King Kaka´s 2013 smash hit ¨Ligi Soo Remix¨.

According to his message, the Eastlando rapper met Razz and even prayed with her, just hours before news of her passing on, came to light.

The late rapper featured in the hit record along with female rappers: Wangechi, Femi One and Petra.

Barely a week ago, King Kaka mourned the death of his longtime producer, Sniper. 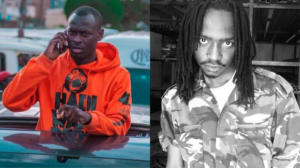 Looks like the year – barely a month and a couple of days in – has shown the legendary rapper enough and he just wants to skip to 2021.

His wifey, Nana Owiti wrote a heart-breaking message to the late rap Queen:

We don´t know what to tell Makayla 💔💔 Why did you give up that fast? Why Razz? @thekingkaka @darkskinmagero and I came to see you last night. You lay on that bed peacefully as you tried to fight. Didn´t know it was the last time we see you breathing. We are beyond Sad😪 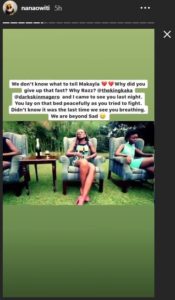 PR practitioner, Magero, who visited the late rapper alongside King Kaka and his wife, tearfully mourned:

Last night at a time like this @nanaowiti, @thekingkaka and I came to see you in hospital, we saw you struggle to breathe despite you being on on the oxygen mask, this broke our hearts and as we left the hospital @thekingkaka told us “itabidi tukuwe wastrong” little did we know that, that would be the last time we’d see you alive on earth.
RIP Dayo.

From her end, Femcee Femi one wrote:

Sad sad news R.I.P Razz Glad to have known and worked with you ❤️

May her soul find eternal rest!

From readers: Save our mothers from fistula

Willy Paul does it again! Asks Bahati to get a wife of his standards (Video)

Boondocks Gang and Shay Diva on a Party tune ‘Firifiri’

Wueh! Why Willy Paul is looking for a video vixen with big booty for his next project!