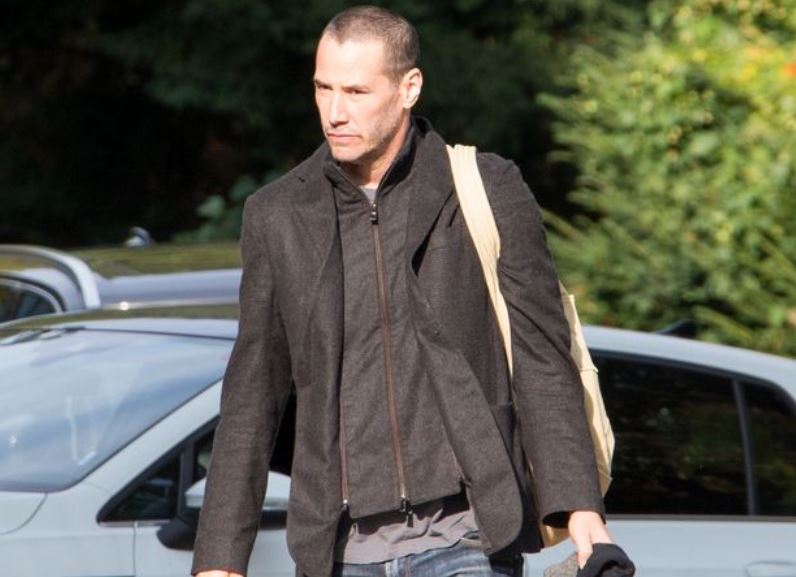 Keanu Reeves is looking unrecognisable after shaving off his signature long hair and debuting a striking buzzcut. In more recent years, the John Wick actor has become more recognisable for his shoulder length dark locks. However, it’s not an entirely new hairstyle for The Matrix 4 star who has previously styled a number of looks during his time in Hollywood. Of course his latest hair transformation is for a movie role.

Keanu, 56, shaved off his dark tresses to reprise his role Neo in the latest instalment of The Matrix franchise. The leading star has been out on location filming in Berlin, Germany for four months as cameras started rolling again amid the coronavirus pandemic. Fans will notice his latest look bares similarities to when his iconic character Neo wakes up in a human breeding facility in the 1999 movie.

Keanu bid farewell to his stunning girlfriend Alexandra Grant who had accompanied him to the hotel in a car. The actor was camera shy as he run his fingers through his freshly cut hair. Temperatures were cool in Berlin so the Canadian kept wrapped up in several layers for his outing. Keanu travelled light with a rucksack over his shoulder and a red carrier bag. The Matrix 4 will hit cinemas in 2021.

Filming has been hampered with delays amid the coronavirus pandemic which sent shockwaves through the entertainment industry. Shooting scenes had to stop in March when the killer virus rocked the world to its core. The hottest stars begun returning to Germany to be on location to film in June. Carrie-Ann Moss has returned to her role as Trinity from the original trilogy. Jada Pinkett-Smith also has reprised her role of Niobe for the fourth film.

In the romance department, Keanu has been happily loved up with his girlfriend Alexandra. The couple delighted the showbiz circuit when they went public with their relationship in November last year. It’s not known how long romantically they have been together but their close relationship stretches back years. They collaborated on grown-up’s picture book Ode to Happiness in 2011. The rest is history.

Seven tips on how to deal with an emotionally unstable partner

Legacy lives on: Veteran musicians who died in the past two months

Lots of deep sleep can delay onset of dementia

After divorcing her husband, Tanzanian actress Sabby is returning to her Kenyan lover in Mtwapa

Men who ‘pimp out’ their wives, daughters to make ends meet