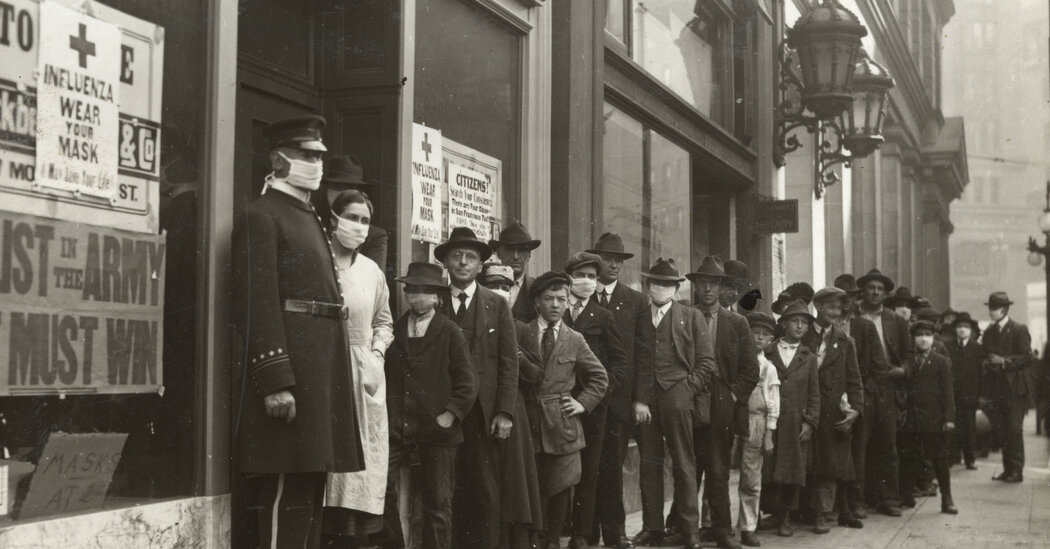 The masks were called muzzles, germ shields and dirt traps. They gave people a “pig-like snout.” Some people snipped holes in their masks to smoke cigars. Others fastened them to dogs in mockery. Bandits used them to rob banks.

More than a century ago, as the 1918 influenza pandemic raged in the United States, masks of gauze and cheesecloth became the facial front lines in the battle against the virus. But as they have now, the masks also stoked political division. Then, as now, medical authorities urged the wearing of masks to help slow the spread of disease. And then, as now, some people resisted.

In 1918 and 1919, as bars, saloons, restaurants, theaters and schools were closed, masks became a scapegoat, a symbol of government overreach, inspiring protests, petitions and defiant bare-face gatherings. All the while, thousands of Americans were dying in a deadly pandemic.

The first infections were identified in March, at an Army base in Kansas, where 100 soldiers were infected. Within a week, the number of flu cases grew fivefold, and soon the disease was taking hold across the country, prompting some cities to impose quarantines and mask orders to contain it.

Organized resistance to mask wearing was not common, Dr. Markel said, but it was present. “There were flare-ups, there were scuffles and there were occasional groups, like the Anti-Mask League,” he said, “but that is the exception rather than the rule.”

At the forefront of the safety measures was San Francisco, where a man returning from a trip to Chicago apparently carried the virus home, research archives show.

By the end of October, there were more than 60,000 cases statewide, with 7,000 of them in San Francisco. It soon became known as the “masked city.”

“The Mask Ordinance,” signed by Mayor James Rolph on Oct. 22, made San Francisco the first American city to require face coverings, which had to be four layers thick.

A ‘pig-like extension of the snout’

Resisters complained about appearance, comfort and freedom, even after the flu killed an estimated 195,000 Americans in October alone.

Alma Whitaker, writing in The Los Angeles Times on Oct. 22, 1918, reviewed masks’ impact on society and celebrity, saying famous people shunned them because it was “so horrid” to go unrecognized.

“The big restaurants are the funniest sights, with all the waiters and diners masked, the latter just raising their screen to pop in a mouthful of food,” she wrote.

When Ms. Whitaker herself declined to wear one, she was “forcibly taken” to the Red Cross as a “slacker,” and ordered to make one and put it on.

The San Francisco Chronicle said the simplest type of mask was of folded gauze affixed with elastic or tape. The police went for gauze masks, which resembled an unflattering “nine ordinary slabs of ravioli arranged in a square.”

There was room for creativity. Some of the coverings were “fearsome looking machines” that lent a “pig-like aspect” to the wearer’s face.

“Where is your mask?” Judge Mathew Brady asked offenders at the Hall of Justice, where sessions dragged into night. Some gave fake names, said they just wanted to light a cigar or that they hated following laws.

Jail terms of 8 hours to 10 days were given out. Those who could not pay $5 were jailed for 48 hours.

The ‘mask slacker’ of San Francisco is shot.

On Oct. 28, a blacksmith named James Wisser stood on Powell and Market streets in front of a drugstore, urging a crowd to dispose of their masks, which he described as “bunk.”

A health inspector, Henry D. Miller, led him to the drugstore to buy a mask.

At the door, Mr. Wisser struck Mr. Miller with a sack of silver dollars and knocked him to the ground, The San Francisco Chronicle reported. While being “pummeled,” Mr. Miller, 62, fired four times with a revolver. Passers-by “scurried for cover,” The Associated Press said.

In Los Angeles, ‘To Mask or Not to Mask.’

That was the headline for a report published in The Los Angeles Times when city officials met in November to decide whether to require residents to wear “germ scarers” or “flu-scarers.”

Public feedback was invited. Some supported masks so theaters, churches and schools could operate. Opponents said masks were “mere dirt and dust traps and do more harm than good.”

“I have seen some persons wearing their masks for a while hanging about their necks, and then apply them to their faces, forgetting that they might have picked up germs while dangling about their clothes,” Dr. E.W. Fleming said in a Los Angeles Times report.

An ear, nose and throat specialist, Dr. John J. Kyle, said: “I saw a woman in a restaurant today with a mask on. She was in ordinary street clothes, and every now and then she raised her hand to her face and fussed with the mask.”

In Illinois, the right to choose, and to reject.

Suffragists fighting for the right to vote made a gesture that rejected covering their mouths at a time when their voices were crucial.

At the annual convention of the Illinois Equal Suffrage Association, in October 1918, they set chairs four feet apart, closed doors to the public and limited attendance to 100 delegates, the Chicago Daily Tribune reported.

But the women “showed their scorn” for masks, it said. It’s unclear why.

Allison K. Lange, an associate history professor at Wentworth Institute of Technology, said one reason could have been that they wanted to keep a highly visible profile.

A “delinquent” bent on blowing his nose tore his mask off so quickly that it “nearly ruptured his ear,” The San Francisco Chronicle reported. He and others stomped on their masks in the street. As a police officer watched, it dawned on him that “his vigil over the masks was done.”

Waiters, barkeeps and others bared their faces. Drinks were on the house. Ice cream shops handed out treats. The sidewalks were strewn with gauze, the “relics of a torturous month,” The Chronicle said.

The spread had been halted. But a second wave was on the horizon.

By December, the San Francisco Board of Supervisors was again proposing a mask requirement, meeting with testy opposition.

Around the end of the year, a bomb was defused outside the office of San Francisco’s chief health officer, Dr. William C. Hassler. “Things were violent and aggressive, but it was because people were losing money,” said Brian Dolan, a medical historian at the University of California, San Francisco. “It wasn’t about a constitutional issue; it was a money issue.”

By the end of 1918, the death toll from influenza had reached at least 244,681, mostly in the last four months, according to government statistics.

In January, Pasadena’s city commission passed a mask ordinance. The police grudgingly enforced it, cracking down on cigar smokers and passengers in cars. Sixty people were arrested on the first day, The Los Angeles Times reported on Jan. 22, in an article titled “Pasadena Snorts Under Masks.”

“It is the most unpopular law ever placed on the Pasadena records,” W.S. McIntyre, the chief of police, told the paper. “We are cursed from all sides.”

Petitions were circulated at cigar stands. Arrests rose, even of the powerful. Ernest May, the president of Security National Bank of Pasadena, and five “prominent” guests were rounded up at the Maryland Hotel one Sunday.

They had masks on, but not covering their faces.

As the contagion moved into its second year, so did the skepticism.

On Dec. 17, 1918, the San Francisco Board of Supervisors reinstituted the mask ordinance after deaths started to climb, a trend that spilled over into the new year with 1,800 flu cases and 101 deaths reported there in the first five days of January.

That board’s decision led to the creation of the Anti-Mask League, a sign that resistance to masks was resurfacing as cities tried to reimpose orders to wear them when infections returned.

The league was led by a woman, E.J. Harrington, a lawyer, social activist and political opponent of the mayor. About a half-dozen other women filled its top ranks. Eight men also joined, some of them representing unions, along with two members of the board of supervisors who had voted against masks.

“The masks turned into a political symbol,” Dr. Dolan said.

On Jan. 25, the league held its first organizational meeting, open to the public at the Dreamland Rink, where they united behind demands for the repeal of the mask ordinance and for the resignations of the mayor and health officials.

Their objections included lack of scientific evidence that masks worked and the idea that forcing people to wear the coverings was unconstitutional.

On Jan. 27, the league protested at a Board of Supervisors meeting, but the mayor held his ground. There were hisses and cries of “freedom and liberty,” Dr. Dolan wrote in his paper on the epidemic.

Repeal came a few days later on Feb. 1, when Mayor Rolph cited a downturn in infections.

But a third wave of flu rolled in late that year. The final death toll reached an estimated 675,000 nationwide, or 30 for every 1,000 people in San Francisco, making it one of the worst-hit cities in America.

Dr. Dolan said the story of the Anti-Mask League, which has drawn renewed interest now in 2020, demonstrates the disconnect between individual choice and universal compliance.

That sentiment echoes through the century from the voice of a San Francisco railway worker named Frank Cocciniglia.

Arrested on Kearny Street in January, Mr. Cocciniglia told the judge that he “was not disposed to do anything not in harmony with his feelings,” according to a Los Angeles Times report.

He was sentenced to five days in jail.

“That suits me,” Mr. Cocciniglia said as he left the stand. “I won’t have to wear a mask there.”

8 Takeaways From the Senate Committee Report on Russian Interference

Smoke From West Coast Wildfires Spreads to the East Coast

Live Updates of the California Wildfires

After Deadly Beirut Explosion, a Search for Answers and Survivors: Live Updates