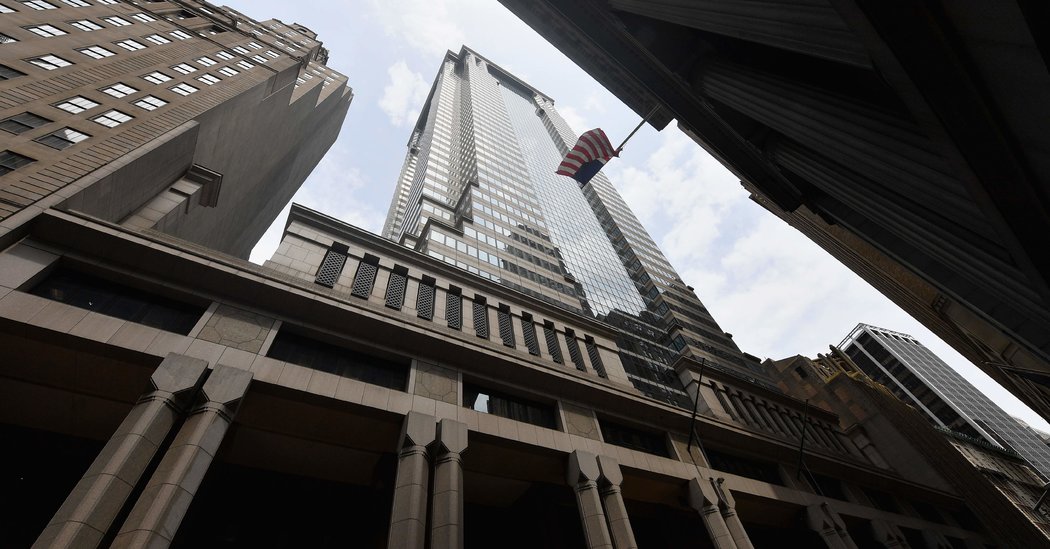 Jeffrey Epstein, the sex criminal and financier, didn’t act alone. Now we know in vivid detail who some of his financial enablers were: executives and bankers at Deutsche Bank.

Last week the New York Department of Financial Services laid bare at least some of the financial underpinnings of Mr. Epstein’s sophisticated enterprise. Deutsche Bank agreed to pay a $150 million fine for its dealings with Mr. Epstein, who committed suicide last August, and for two other matters.

Mr. Epstein’s bankers “created the very real risk” that payments through the bank “could be used to further or cover up criminal activity and perhaps even to endanger more young women,” the department asserted.

Deutsche Bank executives approved Mr. Epstein as a client in 2013 and then kept working with him, even though employees worried about the fact that “40 underage girls had come forward with testimony of Epstein sexually assaulting them,” as the bank put it in internal communications about Mr. Epstein in early 2015.

And even though such high-risk clients are required to be carefully monitored to detect and prevent illegal activity, once Mr. Epstein was a client, “very few problematic transactions were ever questioned, and even when they were, they were usually cleared without satisfactory explanation,” the New York regulator concluded.

Deutsche Bank itself is a corporation, and, as has often been said, it’s people, not corporations, who do bad things. Responsibility for working with Mr. Epstein permeated the ranks of the private-banking division that caters to wealthy clients.

Yet Deutsche Bank declined to publicly identify any individuals involved — and the authorities didn’t demand it. The so-called consent order with the New York agency included no names of the bankers or executives who were implicated; instead, the document is littered with references like RELATIONSHIP MANAGER-1 and EXECUTIVE-2. A bank spokesman, Daniel Hunter, said the bank meted out appropriate punishments to employees who were still at the bank, but declined to name anyone.

Based on descriptions of the employees in the consent order and interviews with current and former Deutsche Bank officials, The New York Times was able to identify nearly every person anonymously described in the order. At least one high-ranking executive remains in her position: Jan Ford, the bank’s head of compliance in the Americas.

It is rare for companies and regulators that are settling allegations of crimes or other misconduct to name the individuals responsible for those misdeeds — a practice that perpetuates the myth that such acts were inadvertently committed by a faceless institution and were not the consequence of decisions made by human beings.

Large companies “will happily pay a big fine as long as senior managers are protected,” said John Coffee Jr., a Columbia Law School professor and author of the forthcoming book “Corporate Crime and Punishment: The Crisis of Underenforcement.”

Fines paid by public companies, even of the $150 million magnitude Deutsche Bank is paying, fall almost entirely on shareholders rather than the individuals responsible. When those individuals bear no discernible consequences, the result is an astonishing rate of recidivism, Mr. Coffee noted, despite repeated apologies and promises that bad behavior won’t happen again.

New York’s Department of Financial Services, not Deutsche Bank, wrote the consent order that omitted the executives’ and bankers’ names. “The New York State Department of Financial Services is the first and only financial regulator to take action against a financial institution in connection with Jeffrey Epstein,” said a spokeswoman for the agency, Sophia Kim. “The department’s consent order provides a wealth of detail about the course of conduct of the bank.”

While the bank may not be legally obligated to name those responsible for the Epstein relationship, it should do so to rebuild public trust, said Brandon Garrett, a professor at Duke Law School and author of “Too Big to Jail.” “When a company does something seriously wrong, then accountability is all the more important,” Mr. Garrett said. “You want assurances they’re cleaning house. That’s especially true for Deutsche Bank, which has been around this block many times.”

Indeed, Deutsche Bank is a symbol of corporate recidivism: It has paid more than $9 billion in fines since 2008 related to a litany of alleged and admitted financial crimes and other transgressions, including manipulating interest rates, failing to prevent money laundering, evading sanctions on Iran and other countries and engaging in fraud in the run-up to the financial crisis.

Deutsche Bank claimed to have put all this behind it when it named Christian Sewing as chief executive in 2018. “We all have to help ensure that this kind of thing does not happen again. It is our duty and our social responsibility to ensure that our banking services are used only for legitimate purposes,” Mr. Sewing said last week in a message to employees.

Since neither the regulator nor the bank would reveal the people responsible for the misconduct, my colleagues and I decided to fill in some of the blanks left by the consent order. (Some of the bankers and executives confirmed their roles; none would comment on the record.)

“RELATIONSHIP MANAGER-1,” who brought Mr. Epstein into Deutsche Bank, is Paul Morris, who had previously helped manage the Epstein account at JPMorgan. Despite Mr. Epstein’s conviction in 2008 of soliciting prostitution from a minor and widespread press coverage of his involvement with underage girls, Mr. Morris in 2013 introduced Mr. Epstein to his Deutsche Bank bosses as “a potential client who could generate millions of dollars of revenue as well as leads for other lucrative clients to the bank,” according to the consent order.

In a subsequent email to higher-ups at the bank, Mr. Morris noted that the Epstein relationship could generate annual revenues of up to $4 million.

Mr. Morris needed approval for a client who carried such reputational risk. He sent Charles Packard, the head of the bank’s American wealth-management division and described in the consent order as “EXECUTIVE-1,” a memo detailing Mr. Epstein’s controversial past. In a subsequent email, Mr. Packard said that he had taken the issue to the division’s general counsel and the head of its anti-money-laundering operation and that neither felt Mr. Epstein required additional review. “We can move ahead so long as nothing further is identified,” Mr. Packard wrote in a May 2013 email to Mr. Morris.

(Deutsche Bank told regulators that it found no written record of any approval from the executives Mr. Packard said he consulted.)

At the time, Deutsche Bank was aggressively expanding its U.S. wealth management business under its new co-chief executive, Anshu Jain. The bank developed a reputation for courting wealthy clients who other banks shunned — including a default-prone real estate developer named Donald J. Trump.

Once the Epstein relationship was underway, Deutsche Bank executives ignored repeated red flags, including suspiciously large cash withdrawals and 120 wire transfers totaling $2.65 million to women with Eastern European surnames and people who had been publicly identified as Mr. Epstein’s co-conspirators, according to the consent order.

That and other activity — including media accounts of Mr. Epstein’s sexual misconduct — led employees in the bank’s anti-financial-crime department to urge executives to further scrutinize the Epstein relationship.

Mr. Morris and Mr. Packard met with Mr. Epstein at his East 71st Street mansion in January 2015 and asked him “about the veracity of the recent allegations,” according to the consent order. No one took notes; the bank told regulators it had no record of the substance of the meeting.

Whatever Mr. Epstein said, Mr. Packard “appeared to be satisfied,” according to the consent order. No one subsequently asked Mr. Morris for his opinion. Deutsche Bank apparently didn’t further investigate the allegations against Mr. Epstein.

Eight days after the visit to Mr. Epstein’s mansion, a bank committee charged with vetting transactions that pose risks to the bank’s reputation held a meeting. According to a bank official familiar with the meeting, it was chaired by Stuart Clarke, chief operating officer for the Americas; other attendees included Michael Chepiga, acting general counsel for the Americas; and Ms. Ford, the compliance executive who had joined the bank just one week earlier.

The following week Ms. Ford, the head of compliance, memorialized the decision in an email to Mr. Packard and other executives that put the onus squarely on Mr. Packard: Deutsche Bank would “continue business as usual with Jeff Epstein based upon” Mr. Packard’s “due diligence visit with him.” Ms. Ford also imposed some conditions on the relationship, but Mr. Packard and others “inexplicably” failed to convey those conditions to all of those who regularly dealt with Mr. Epstein. The bankers “continued conducting business with Epstein in the same manner as they had,” the consent order said.

Only after The Miami Herald revealed in November 2018 the extent of Mr. Epstein’s sexual misconduct and lenient plea deal did Deutsche Bank begin to wind down its relationship with Mr. Epstein. Even then, a bank executive wrote letters to two other financial institutions essentially vouching for Mr. Epstein.

By then Mr. Morris and Mr. Packard had both left the bank. Mr. Morris went to Merrill Lynch, where he’s a private wealth adviser. Mr. Packard joined Bridgewater Associates, the hedge fund founded by Ray Dalio.

Of the members of the risk-assessment committee who approved continuing the Epstein relationship, Mr. Clarke and Mr. Chepiga have both left the bank. Only Ms. Ford remains.

The bank’s Mr. Hunter declined to comment on her behalf. “Deutsche Bank undertook appropriate disciplinary actions based upon its findings regarding the underlying conduct, including termination for some employees,” Mr. Hunter said. “We do not comment on individual instances of employee discipline.”

Ngilu summoned to defend herself before impeachment debate

Mistrust of a Coronavirus Vaccine Could Imperil Widespread Immunity

Kenya’s Unusual Solution to the School Problem: Cancel the Year and Start Over