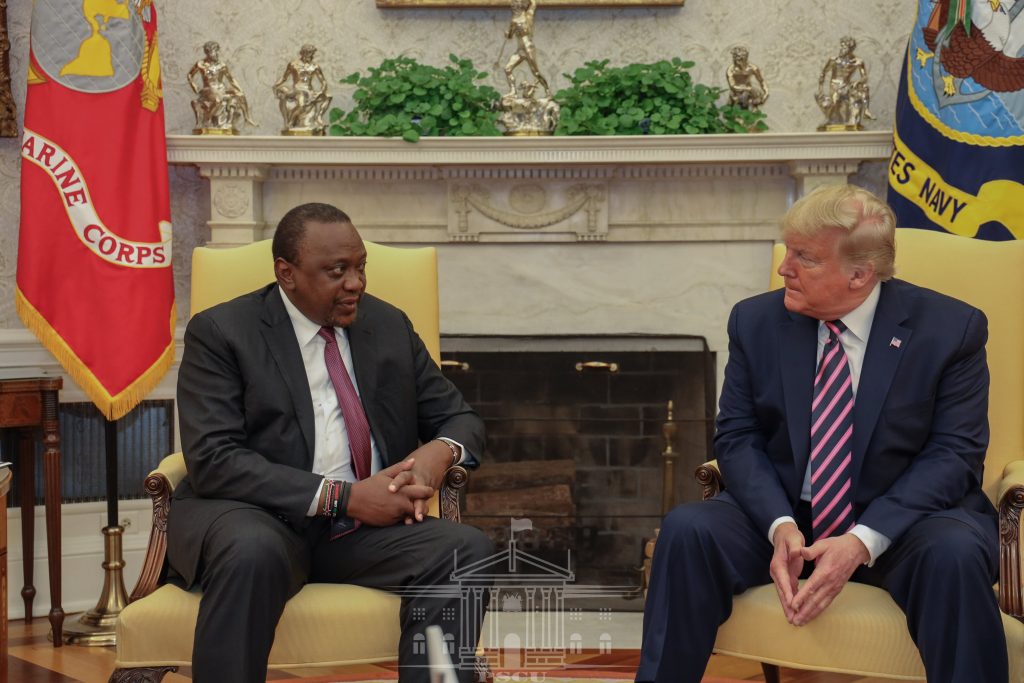 The
Kenya-US Free Trade Agreement is expected to give the two countries a more
level laying ground improving trade for both countries through enhanced
policies which favour the two working together.

To
keep things in momentum, the Kenya Private Sector Alliance (KEPSA) in
partnership with the Corporate Council on Africa (CCA) hosted a roundtable
discussion on February 13 with Kenyan and US business leaders and senior
government officials to explore how the private sector can support this
bilateral effort and take full advantage of investment and trade opportunities
that will arise from a Kenya-US Free Trade Agreement.

This comes as a follow up to the recent visit of H.E. President Kenyatta to the United States, where the US and Kenyan Government announced the launch of talks aimed at establishing a free trade agreement (FTA) between the two countries.

Read about the Billion-Shilling Trade Opportunities Between Kenya and Somalia

If
successful, it would be the first United States FTA with a sub-Saharan African
nation and potentially a model the United States will use to enhance its trade
and investment relationship with other African countries.

“As
you all know, last week in Washington D.C., Presidents Kenyatta and Trump
announced at a White House meeting, the commencement of negotiations of a
comprehensive, high-standard agreement between the United States and Kenya,
which could serve as a model for additional agreements across Africa,”
President CCA, Florizelle Liser.

US Ambassador to Kenya, Kyle McCarter who spoke at the event said: “We look forward to working together to create a free-trade agreement that allows Kenyan and American businesses to benefit from increased access to each other’s’ markets and one where both our consumers will enjoy greater prosperity through expanded choice and competition within the marketplace. A successful US-Kenya FTA will stand as a landmark for East Africa, and for all of Africa.”

KEPSA
CEO, Carole Karuga, emphasized the importance of the realization of the FTA
between Kenya and the United States stating that it was poised to increase
trade opportunities for export and import as well growth of business.

Karuga
pointed out that Kenya had the highest GDP with in the East African Community
and Kenyan business are leading in moving continental trade.

The realization of the FTA between Kenya and the US would have a positive impact on the Africa Continental Free Trade Agreement (ACFTA) of which initially requires members to remove tariffs from 90% of goods, allowing free access to commodities, goods, and services across the continent.

The
FTA is a positive and timely development for Kenya as the African Growth and
Opportunity Act (AGOA) ends in 2025.

“Kenya should draw lessons from Morocco on the challenges and opportunities that are emerging with the free trade agreement between Morocco and the US in order to learn and eventually do better,” she urged. In this regard, KEPSA, CCA and General Confederation of Enterprises in Morocco (CGEM) will work together to learn lessons from the Morocco experience.

PS,
State Department of Trade, Amb. Johnson Weru appreciated the synergy between
Government and private sector, adding that the government is willing to walk
this journey together with the private sector.

“As we speak there is a government team that is also dissecting the deliberations that took place in Washington last week. Kenya has a great appetite for this opportunity,” Amb. Weru said.

Ruth
Kagia, Deputy Chief of Staff, Policy and Strategy, Executive Office of the
President of Kenya, appreciated the discussion that took place in Washington
pointing out that this has the highest political support.

A Kenya-US FTA would build on the success Kenya has experienced in producing and exporting a range of value-added products to the US market under the African Growth and Opportunity Act (AGOA), while enhancing two-way trade, strengthening commercial cooperation, and spurring investment into key sectors noting that the FTA would act as a stamp of approval to spur trade and investments by assuring long-term predictability to companies in both countries.

Dr Kagia, however, pointed out the following concerning the next steps for Kenya in realizing the FTA:

Upon
conclusion of negotiations and signing of the FTA, trade has to be two way and
in large volumes for sustainability, small industries need to be protected and
challenges in logistics need to be resolved for the ease of doing business
between the two countries to be realized.

KEPSA
and CCA signed an MoU on the side-lines of the round table to promote mutual
interests through cooperation in the promotion of trade and investment
opportunities in Kenya. This emphasizes on the need to explore opportunities
between Kenya and the United States on the backdrop of the commencement of the
negotiations on the free trade agreement between Kenya and the United States.

Free
trade increases prosperity for the citizens of all participating nations by
allowing consumers to buy more, better-quality products at lower costs.